A whole bunch of new bookplate designs just hit the shop today and I thought I'd talk about my intent behind each design! 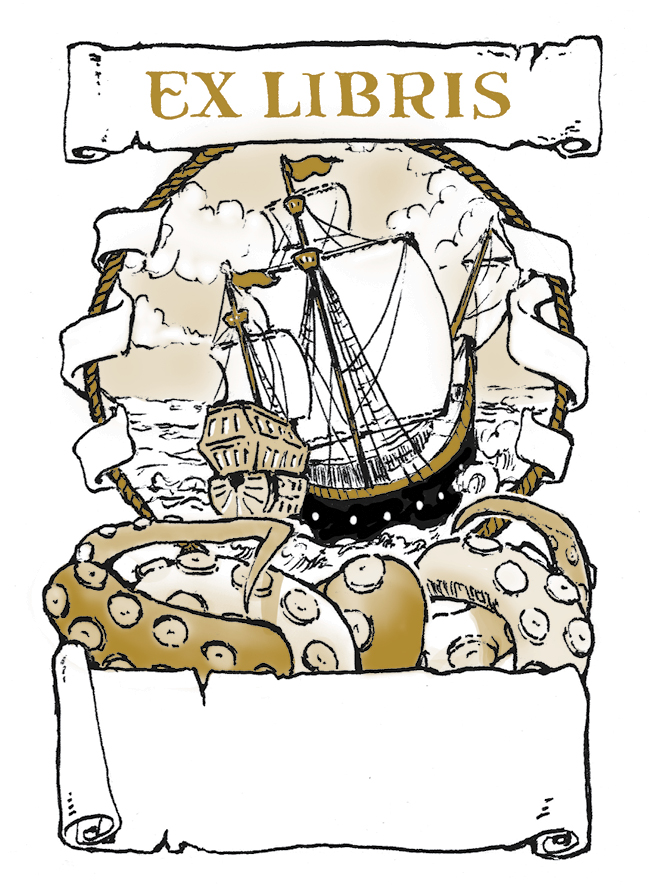 This design was inspired after I was gifted a book with a nautical themed bookplate. It had always been a goal of mine to do a ship based design, this was the push I needed! Back at uni I had drawn tentacles for a project and I remember how much I enjoyed drawing how they curved and how the suckers would recede back because of how the tentacles were twisted. I added some other classic elements like the parchment scrolls, banderoles and rope. This design was entirely drawn in pen and ink in my sketchbook, scanned and then I digitally coloured in the gold ink. 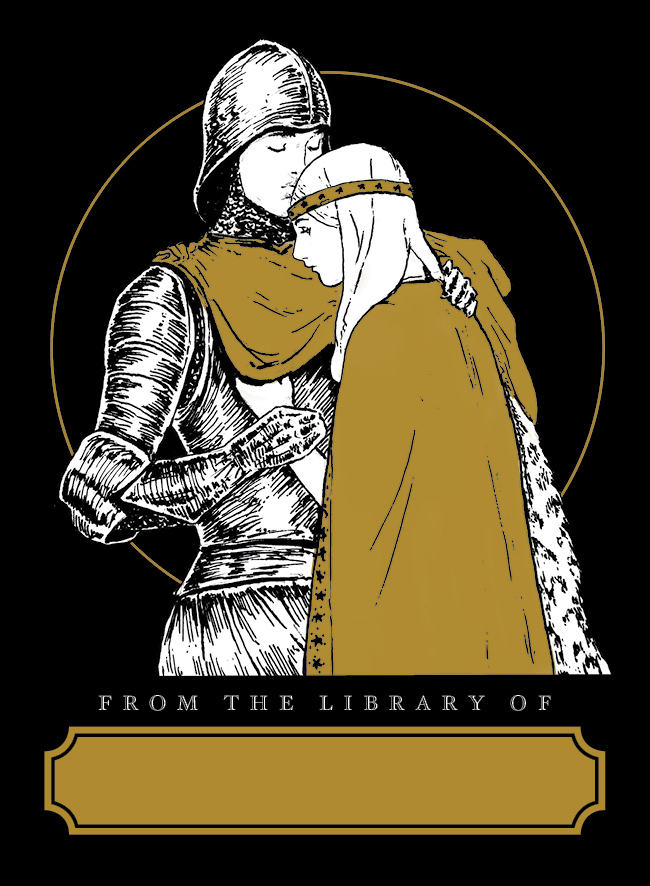 This was initially called 'Lunar Eclipse' and was part of my Star Catcher series. In my head I named the characters Ariadne and Triton. It initially appeared in my 2020 calendar and again was drawn entirely in pen and ink in my sketchbook. I remember this was one of the first drawings I did which involved a couple! I was really worried I'd get the proportions wrong (given the fact I was inking it). The black background the circle (the "eclipse" part of the drawing) was added in digitally. It's not often I have an entire black background so this was a little bit of a departure from my usual bookplates! These sort of melancholy, evocative, romantic scenarios really do it for me haha 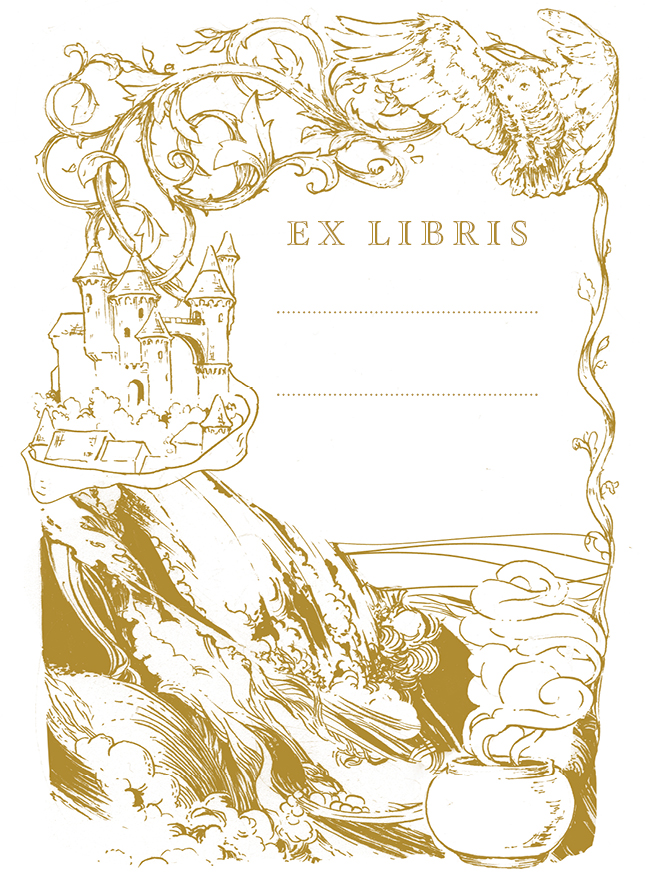 Any guesses what this could be inspired by?! The original artwork was commissioned as an alternative dust jacket for a Harry Potter book subscription box! I actually did initially have Harry in the bottom left but to avoid any chance of having a cease and desist letter I opted to remove him and have a flowing cascade instead. Again, all done in pen and ink on paper. I did think about doing this entirely digitally but I know for a fact I draw faster on paper than I do digitally. There's something about not being able to 'ctrl z' that forces you to keep moving forward, even if you make an error, instead of a few steps back every so often with digital. I do use digital tools initially laying out the composition, then transferring it to my sketchbook (the old school method of printing out the design, rubbing graphite on the back and then going over the design with a used ballpoint pen to 'transfer' the graphite) where I use a dip pen and ink to ink the entire drawing. 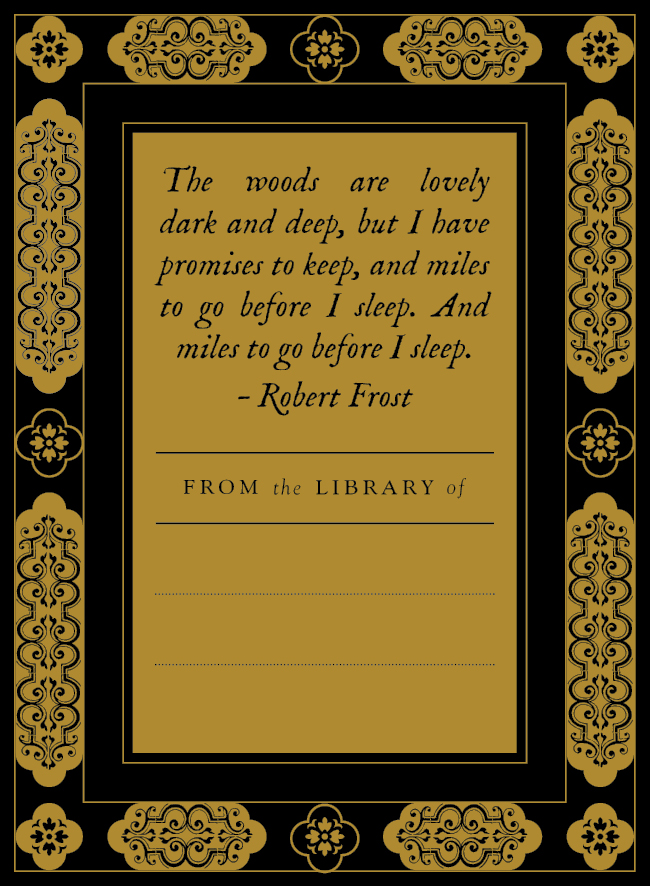 Taking inspiration from One Thousand and One Nights I was looking at Persian book covers when I got to this composition. I love quatrefoils (the 4 leaf clover shape) so made sure to include that in the border. The elements inside were actually 'glyphs' of a font I have. Fonts don't necessarily have to contain letters/numbers/punctuation but can include graphics (like Wingdings). This particular font I used had seamless tiling elements which was how I could get the longer elements - essentially I was pressing 1-2-2-2-3 to get the pattern! Notice how this design and the above Knight's Goodbye are the only designs in my collection to have a gold ink space to write your name. And this design I purposely left out white altogether which makes this a really striking departure from my usual bookplates! The Robert Frost quote I thought fit so well in terms of the bookplate title, as well as alluding a little bit to the act of reading... "miles to go before I sleep". 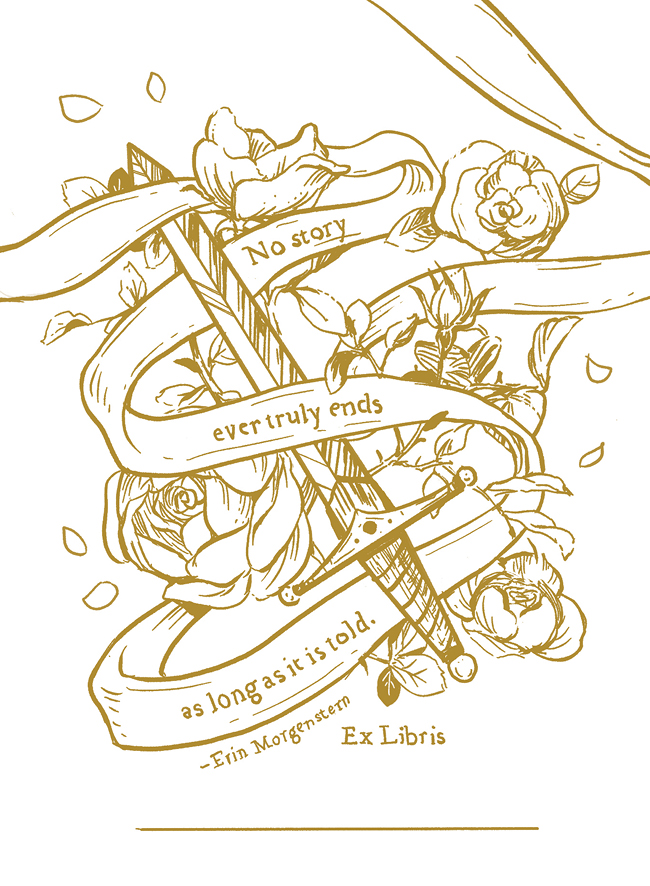 For those who have a good memory, Shadowsteel used to be a limited edition design when I first launched Fleur & Fable. It was part of a pack inspired by Erin Morgenstern's book The Starless Sea. The other designs included a key and a bee connected by a ribbon (so if you had the 3 together it would line up where the ribbon cuts off on the edges). It was initially commissioned for Illumicrate! I was really grateful for the opportunity to draw for such a well respected book box. Unlike my other bookplates, this was entirely done digitally. A little trick for the lettering I learnt was to have it typed out, and on a new layer trace over the lettering. This is so you still have the right letter proportions and for it to match your lineart style.

Thanks for making it this far, I hope you like the new designs!